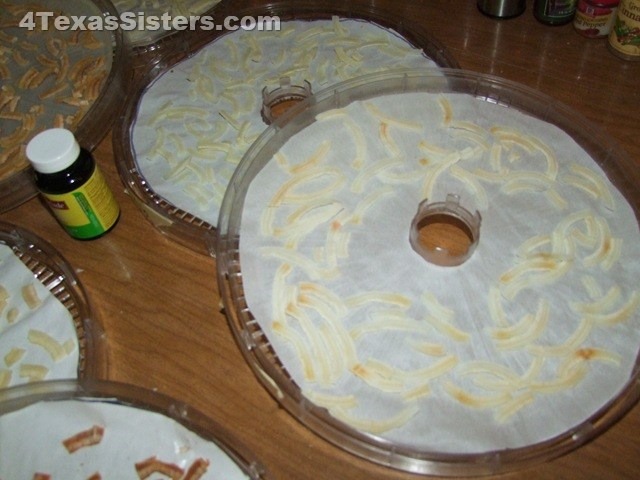 When we last processed coconuts at Shari’s house, we discovered that some of the coconuts turned different shades of pink, red, brown, and some didn’t.

I had 3 coconuts at home in the freezer, so I volunteered to do an experiment.  Jennifer previously posted on why coconuts discolor during processing.  She provided me with some Vitamin C tablets to use when I processed my coconuts.

I took the 3 coconuts & processed each one individually.  As I peeled the meat from the shell, I set aside 1/2 of each – 1/2 processed normally & 1/2 processed soaking it in vitamin C.  I labeled each tray – 1a, 1b, 2a, 2b, 3a, 3b.  I dehydrated the regular coconut as soon as I sliced the coconut into flakes.

.
My deductive reasoning says that maybe we should soak our coconut in Vitamin C before drying to prevent browning – that is if you only want “pristine” white coconut or something close to it.

“Age is not a particularly interesting subject. Anyone can get old. All you have to do is live long enough.” – Don Marquis 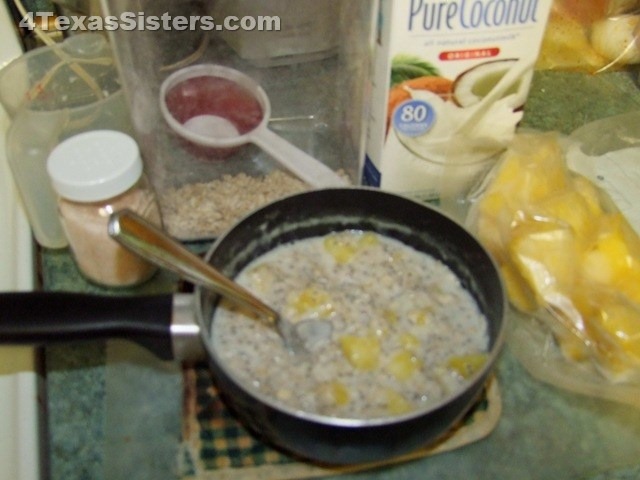 Ever since our last get-together at Shari’s house, I have been trying different stove-top oatmeal recipes from http://theoatmealartist.blogspot.com/p/recipe-index.html. While we were there, we tried several baked oatmeal with such yummy outcomes.

The completed Pina Colada oatmeal. I forgot to take a picture when I put it in the bowl. I did sprinkle some shredded coconut on top, but not enough the first time. I ended up adding more coconut because I couldn’t quite taste it. In the future, I might add some coconut extract before I eat it.

The completed Almond Joy oatmeal. I forgot to put the milk out when I took the picture. The brown substance in the little plastic bowl is some coconut powdered sugar I made yesterday. I sprinkled a bit on the oatmeal because the dark chocolate cocoa I used was very “un-sweet.”

Dale said the Almond Joy oatmeal looked like “Chocolate!” Happy Birthday to the love of my life, my husband of almost 44 years, who turned 65 today!

I will continue to try more stovetop oatmeal recipes from “The Oatmeal Artist!”

Until the next time – 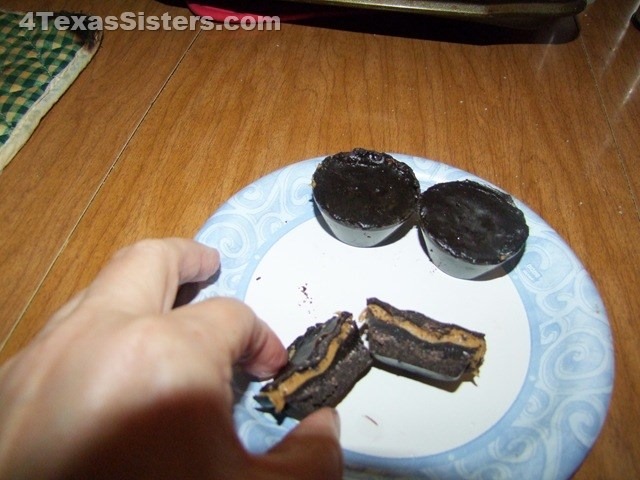 Today is our oldest sister’s (Pat) birthday. I hope you had a wonderful day & that you celebrate many, many more! We all love & miss you. We can’t wait until you can start joining us for our “sister’s” week!

I indicated in my last post that I would be making some different candies, Well, I had to use my precious dried coconut to make them. I have now used almost 6 cups of my 1.25 lbs of coconut. 🙁 But, oh, boy..it’s good!

Here are some photos of the ghee I made. It’s really clarified butter, you put one pound of butter (not margarine – REAL butter – organic, grass-fed, etc…your choice) into a saucepan & turn the heat on low. I let this stuff cook for well over 30 minutes. What happens is the butter milk solids separate from the fat. When you can see through the liquid in the pan, you are ready to drain off the solids.

Jen & I looked high & low to find cheesecloth where we live (her there & me here)…so instead of cheesecloth, we use part of a pantyhose leg to do our draining. (They were BRAND NEW..never been worn). We have used this for making coconut milk, draining her quinoa, & me for removing the milk solids from the ghee.

I wanted to make some Peanut Butter Cup candies because Dale likes them! So, I gathered the requisite items & started to make the shell. Understand that the recipe calls for mini-muffin pan(s) – check & the little crinkled papers to go inside. Wellllll, guess who didn’t have the liner cups? I was determined to go ahead, so on I went.

Warming coconut butter with coconut oil, 1 tsp of honey, & cocoa (dark chocolate, of course!), while I mixed 1 Tbsp of honey with peanut butter. Must not have had my glasses on straight because, I used twice as much peanut butter as the recipe called for and only the required amount of the honey. (Dale said they could have used some more sweetner!)…lol.

I put 1 1/2 tsp of coating (chocolate & coconut cream) into each mini-muffin cup. I was supposed to use my finger to run around the inside & help it slide UP the sides of the liner. I guess now would be a good time to say that I put just a little bit of coconut oil inside each cup so that the candy would come out of the tin. WELLLL…it also kept the chocolate from staying UP the sides but I didn’t know that until later.

After filling the cups, I put the muffin tin in the fridge so the coating would harden. I spooned the filling into each cup & spooned the remaining chocolate over the top of all of it. I made sure to spread the topping to the edge of each cup. I let them sit in the fridge for almost 30 minutes.

Then it was time to take them out & taste test! I thought they were terrific…Dale thought the base of the candy was WAAAAYYYY too thick…me…being the chocoholic that I am…LOVED IT!!!!

I do plan to make some cashew butter & sun butter cups soon. 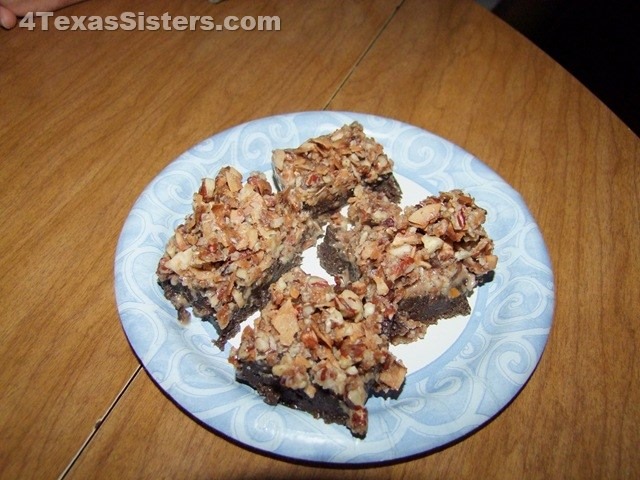 Are we nuts to do more coconuts? I hardly think so. There are so many good things that can be made with coconut in one form or another.

Have you ever seen a picture of something to eat that you wanted to make only to find that it didn’t turn out exactly like you thought it would? In my efforts to find a healthier way of eating, I stumbled upon a terrific website – www.tropicaltraditions.com.

(Note: They are a good information source about coconuts & have lots of recipes using this divine nut meat. Understand, I am in no way promoting their products.)

I must confess to having a terrible “sweet tooth.” So when I saw a picture of some German Chocolate Style Bars, I was hooked. No processed sugars, no dairy, no eggs, no gluten… The only hindrance in making them was that I had NO coconut cream/concentrate or ghee.

Hence, the additional coconuts Jen & I picked up on our way home from Shari’s – where we processed 13 coconuts! As Shari previously stated, whole coconuts are a very labor intensive proposition with very little reward – my 4 coconuts produced 1 1/4 lbs of shredded/sliced coconut.

After making the coconut concentrate (about 45 minutes), I was ready to make my chosen “goodie.” When we processed the coconut, Jen & I added a bit of coconut oil to hopefully speed up the process. All it appeared to do was add a layer of oil on top of the cream.

I made the bars according to the recipe – however, I did not chop the pecans finely enough so they were still in fairly large chunks. After the bars sat in the refrigerator for the requisite time, I pulled them out & cut them. (Question: How do you cut an 8×8 pan of cookie bars into 25 pieces?) It appeared that the coconut cream separated out of the base & was extremely oily; but it was good coconut oil!!! They were a bit chewy & oily.

After sampling the German Chocolate Style bars, I found out that my husband, Dale, doesn’t like coconut as much as I do. He has a problem with the excessive oil because of his dentures.

I have since drained the excess oil off of the coconut cream & I think it is much better. Since I have never purchased coconut cream before, I really have no idea of what it should look like but I think this is what I would imagine it should be.

In order to make these cookie bars, I had to make ghee (or clarified butter). It was not difficult..just a bit time consuming. I will add some commentary, pictures, & instructions on how I made it in another post as well as some Peanut Butter Cups that I made (dairy free, soy free, gluten free, egg free, & no processed sugar). Yummy!!!!!

Let’s not all talk at once now, ladies….  Who’s first?

Well, it was Shari’s idea to create a blog site after we had a 3 out of 4 sister week where we played with coconuts.

Shari says that sounds perverse now, Deb agreed; however, I’m not sure what else you would call it.

Shari thought we should explain why we played with coconuts and even though my name shows at the top of this post, all three of us will have contributed …… SO

Take it over Shari…

Shari here (because Jennifer is insisting, and when she insists….well, you get the idea):

Over the past year, I’ve been trying to clean up my eating habits, and Jennifer has been doing the same.  It seemed as if every time she came to visit me, she had a new health tip: raw honey, quinoa, Himalayan salt, chia, to name a few.  A few weeks ago, Jen came to stay a night or two, she shared her latest craze: the virtues of all things coconut, which as it seems, she got from Deb.

While we were talking about it, we decided I would order some coconut oil and give it a try.  She left my house and went to Deb’s for her weekend of running the karaoke show at the VFW, and next thing I know, we’re all going to provide 2 coconuts for their next trip here.  How we went from buying coconut oil to making our own, I’ll never know, but welcome to the minds of the other half of life.

That’s what I get for being the youngest.

I guess I get to pick up the story from here (at least for a bit) – This is Deb.  Thanks to Jen & her unlimited knowledge of all things including her skills on the computer & her extensive research on all things healthy.  Shari said she didn’t know how we got from the coconut oil to creating our own.

Before Thanksgiving, my son & his family decided to make a lifestyle change to a more whole food type of eating.   In my research for healthier foods, I discovered the benefits of coconut (oil, water, milk, etc).  When Jen came to stay with me one weekend, we discussed the process of making coconut milk, coconut concentrate (butter), and shredded coconut.

We know that we can purchase all of these things either locally or on-line (typically through Amazon.com), but we decided to try and do as many of them as we could.  Jen & I purchased a few coconuts for that weekend & milked, smashed, blended, & made coconut butter for almost an entire day!

We then decided we MUST share this experience with Shari & her boys.  What a day that was.  Unfortunately, we didn’t get very many pictures of the process but, we did, however have a blast!

Jen, over to you now to wrap up our first post!

Shari took some pictures of our coconut extravaganza and a few of the de-lish sweets that were made… (I almost said WE made- LOL I stood around watching while the co0king experts did their things.)

Deb and Shari are going to be adding some posts talking about what they created over the 2+ days we spent together.

And ……. we’ll be sharing all sorts of things, even how we all decided it was time to get together more often…. like once a month.

Til the next time…  I’ll leave you with this thought…