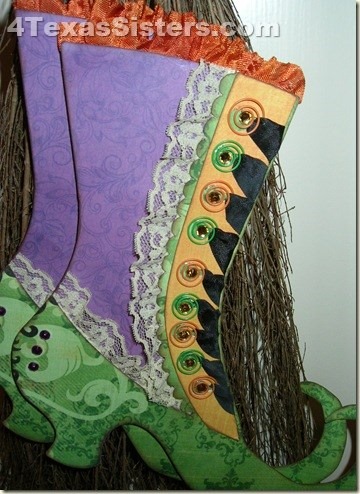 The Challenge: Create a Halloween Home Decor project! Your project must include at least 2 different Cricut Image Cuts.

I was excited to see this month’s challenge was a home d’cor project, as I had already purchased the straw broom to use for Halloween.  Of course, I had no idea what I was going to do with it when I purchased it, as I had only a vague picture in my head of how it might be transformed.  However, a witch’s broom needs all the accessories of the witch herself, so that made the project come into focus.

The boots were accessorized with some vintage lace (again, from my mother’s collection), hand-dyed ribbon, rhinestones and small paperclips.

To decorate the hat, I used 4 layers of green tulle, which I sewed together for ease of working with it.  The hat band was enhanced using hand-dyed ribbon and copper glitter on the buckle.  A bow was added to the top of the hat.  (This photo was taken before I realized I hadn’t reset the spider; the first photo shows the spider hanging down, rather than sideways.)

The bow was the final touch and included the witch’s accessories, such as a wand and poison potion.  I used my new bow maker to create the bow, and I learned that you really need ribbon with a wire to make it easier.  Glitter was added to the star on the wand and the “poison” and skull. You cannot see it in the photo, but the bone is white and also glittered. I think I will go back and add some rhinestones to the bottom of the bottle where the holes are.

The project turned out much nicer than I expected, and looks so much better in person than in the photos.  Now, we’re ready for all the trick-or-treaters tomorrow night!