Life is about perspective.

All the cakes are made, marked and in the freezer ready to be filled, glazed, iced, etc. I even squeezed in a second round of the Red Velvet cake to test it with less oil.

Largely, all the cakes were relatively easy to do, but the last 2 actually took both mixers, gobs of bowls and one a double boiler. The first 2 cakes are posted on the blog, with detailed photos.

When I started this process, I switched to Daniel’s camera because he never uses it.  I don’t like using mine because I am afraid of getting food, oil, flour dust, etc., into it.

Now, with no worries about ruining my camera, I diligently pressed forward taking photos and baking the remainder of the cakes. I even enlisted Daniel for the last 2 cakes because I’m still new at this (cooking/baking and photo taking), and what should have been a few minutes of time from mixer to oven, was taking up to 2 hours.

So, Daniel took the photos of the last 2 days of cakes.  The cakes went together quickly even with some additional steps, like melting chocolate and whipping egg whites.

I had time to put the first 2 days of photos on my computer, but thereafter, I just was too busy.  I spent all day today catching up on the blogs, and was working to try to get at least a day ahead.

Then, it came time to add the photos to blog 3. Photos – you know, all those hundreds we took using Daniel’s camera.

The last photo on his camera was taken the first evening after I cooked the first 2 cakes.  We have photos of Spirit sitting on a blanket on his luggage.  Cute, but not steps for making cakes. 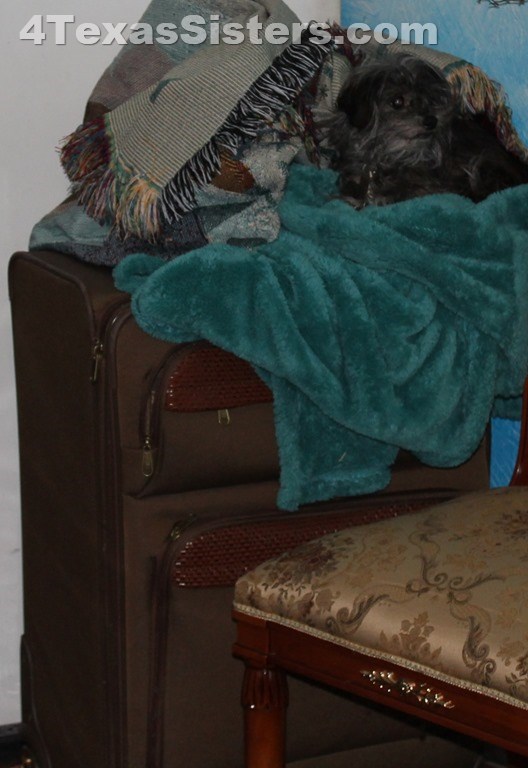 Daniel has just informed me that photo was taken on my camera, not his. That means no photos were actually recorded to the SD card.

At first, I was in shock; I just couldn’t believe there were absolutely no photos. Panic began to set in at the thought of this series.

It is after all, just cakes.  Right?

I can recreate the photos by simply baking more cakes. It’s not like I’ve lost photos of loved one’s no longer with us.

This is what life is all about: mishaps with sisters chasing you and you trip, shoving your teeth back into your gums, or sticking a crayon up your nose, for whatever reason, and getting it stuck.

I’m not sure this is even as bad as making a cake and finding the dog has eaten a third of it moments before your party guests arrive.

Since this moment was destined to become one of those funny stories we will tell later and laugh, why not just laugh about it now?

The greater issue was how to proceed with the blog at this point. The decision was unanimous to post what I have and add the photos when I have the chance to bake them again.

So, for now, the cake recipes and details will be posted without photos.

The next time something doesn’t go according to “the plan,” ask yourself this: “In a year, will this be funny? In 6 months? After a good night’s sleep?”

If the answer to any of those is “Yes,” then go ahead and laugh now!