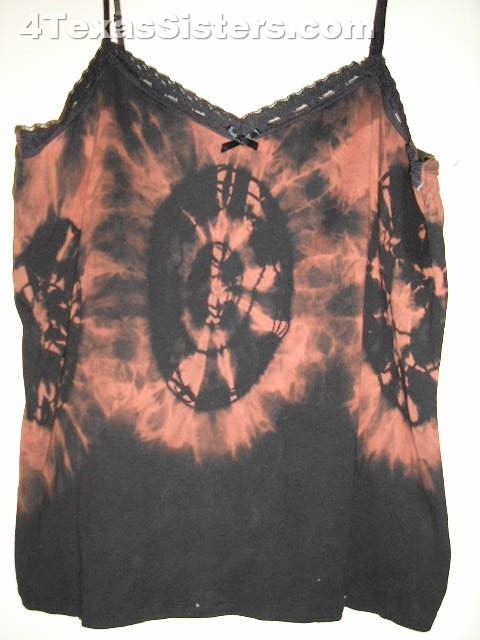 Having become a part of ItWorks Global a year ago, I’ve been slow to catch on to the “Green, Black, Bling” thing (Green and Black being our company’s primary colors).

It’s not that I don’t like black clothing – in fact I love ALL aspects of anything in the clothing line that is BLACK. It’s the GREEN I’m just not that “all in” to.  But, I AM slowly converting over to the idea.

Recently Deb and I were in Wal-Mart so I could do my weekly, catch up, shopping after returning from Shari’s. Deb has these really cool built-in Bra tops that she’s gotten at Wal-Mart over time so I asked her to breeze through the clothing department with me to see if we could find something similar in my size.

Wha-la! we did and that day I came home with 4 tops: one in navy blue, fuchsia, turquoise, and pink (YUK).  I had hoped to find one in GREEN, but no luck there. I bought them in a slightly larger size than probably necessary but I don’t like clothes clinging to my skin either.

This last week while I was doing my regular weekly shopping I went back to the clothing department and found a black top in a smaller size that probably fits me better. I bought it with the idea that I would see if I could discharge some of the black out – enough to re-dye green so that I would have something original in the “Green-Black,” bling thing category.

If we were allowed to create our own commercialized tops, I’d get Pat to paint something up for me, but we’re not… however, we can still pick and chose different outfits based on the ‘color’ scheme.  So that is where my thoughts were for this project.

Here is what I started with:

After I got the top rubber-banded, I took a very large clean, plastic bowl and mixed about 1/4 cup bleach with 8 cups of hot water. Then I gently laid the rubber banded portions of the top just barely into the bleach water filled plastic bowl.  As you?ll see in my “after pictures,” I did not want to discharge the entire thing.

Once in the bleach bath, I checked the progress every 5 minutes.

If you’re new to discharging, you may not be aware that using bleach as your color-removal agent really breaks down the fabric horribly. And even though the top did not cost a lot, I hadn’t even worn it yet, so did not want to bleach it into pieces. LOL

While I waited for the discharge process to do it’s thing, I got another very large clean plastic bowl and filled it half-full with cold water and a cup of regular vinegar.? Not very scientific in my measurements but there are other sites on the internet that are and they can give you the scientific specifics if you need them. Without doing the research myself, I knew this ratio of vinegar to water would be enough for my purpose. (As well as the bleach bath I made up above.)

Though it did not discharge out to “white,” after 15 minutes I decided, based on the type fabric, that it had been in long enough. I pulled the top out of the bleach and immediately dunked it into the vinegar bath I had made while waiting.  I swished the top around in the vinegar water for a few minutes then removed the rubber bands and left it soaking in the vinegar for about 5-10 minutes.

The vinegar bath is one method that stops the bleach discharging process. Some people just rinse the material in clear, clean water and I might have done that if I did not have the vinegar handy. 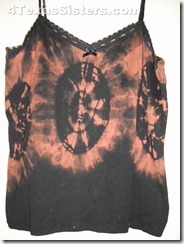 After the vinegar bath, I hand washed it to remove any vinegar smell and then line-dried it in a shady area of the backyard.  I could have thrown it in the washing machine, but firing up the washer for ONE piece of clothing just is not my thing.

So here are the results. and even though I don’t think it’s discharged enough to re-dye with green, I like the combination of black and brown.

In the picture, it looks like the black is faded out but it’s not. I think that was just the camera flash that washed it out.

And here’s the back 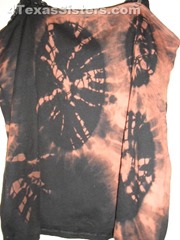 I noticed there’s a fold in the fabric in this picture, so you don’t see the whole design, but over-all, I do love the effect and it turned out very nicely. You should see it off camera.   It looks very rich and warm.

Discharging fabric is always exciting, give it a try. In the meantime, I’ll continue to search for a method to create that “Black and Green” bling thing but this project just didn’t turn out to be IT!

PS: Oh, that YUK pink top – I got it with the idea of splashing some blue or fuchsia Seta fabric paint on it.? I’ll let you know if that actually happens.

Til the next time!

You’re never too young or too old! So …