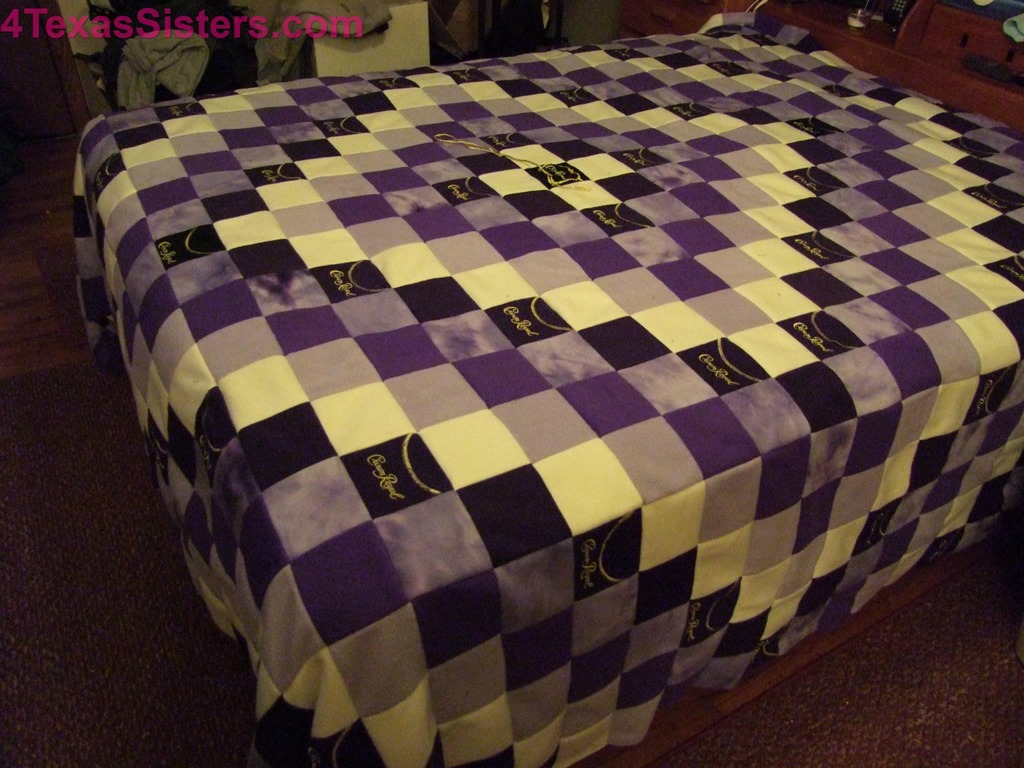 One of my friends from the Richard A. Anderson VFW Post #8953 told me they had quite a few Crown Royal bags. For those of you who might not know what that is – I didn’t either because I don’t drink Crown Royal. It is a bag made of a very lightweight flannel in a size to fit the bottle. They come in small sizes & large sizes. After working with them for awhile, I found out that within each size, they are not even the same size all the time.

So, I took on the project of making a Crown Royal quilt. Let’s step back here a minute – why is it that when you sew, everybody thinks you can do everything? I have NEVER in my life made a quilt. This was to be my first quilt & I was scared to death.

This is a King/Queen size quilt and there are 625 individual squares that make up this quilt. I sewed 5 squares together in a line & then sewed 4 more rows of 5 squares. I combined these 5 rows into one big square. I repeated this 24 more times (giving me twenty-five 5″ square squares).

I started with a specialty square in the middle of the quilt & built my strips, alternating colors as I went. I used the flannel bags, front & back, & light fleece – white, purple tie-dye, darker purple & a light lilac, for the front.  Finding the right colors was another time consuming thing.

Now remember, I am using a home sewing machine, with this HUGE quilt once it is all put together.  By rolling the quilt up so I only had a little bit at a time under the needle, I finally got all of the squares within squares put together. Now comes the fun part – putting the batting & backing on the front. I laid the quilt front side down & laid the batting on the back then, after piecing the backing together (wasn’t large enough), I pinned the 3 layers together to do the quilting. What to do! what to do!

More tight rolling to get it in the needle area & turning it around to do only 1/4 at a time. I decided to do the quilting in the corners only instead of across the whole quilt & started in the middle & worked my way to the outside of the quilt.

I decided to use the sides of the bags as my binding so I had to cut them & sew them into a long strip – long enough to go around the outside of the quilt. I pinned it on the back side & folded it over & sewed it.  I had a few problems with the corners but persevered & completed the quilt. It only took me 2 years or so to complete it because as I ran into a problem, I would put it aside so I could do some more research. I don’t like to keep working on a problem after I become frustrated with it – I just get in more trouble.

Here is a picture of the quilt before I put the batting, backing or binding on it.